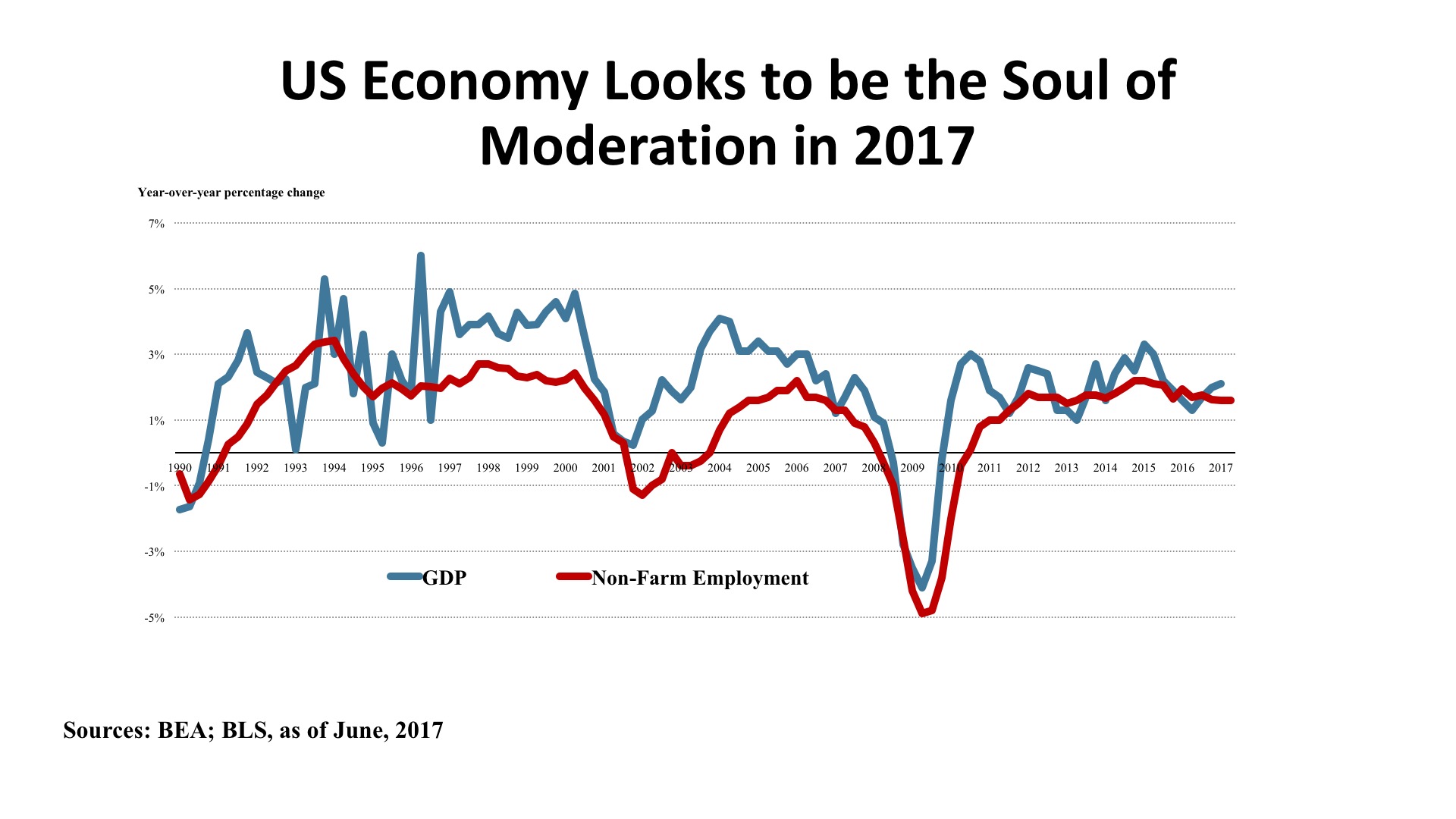 There is no more recurrent question posed in real estate analysis than, “Where are we in the cycle?” The mood amongst economic forecasters can best be described as “benign.” While there is a general consensus that the present expansion is getting long in the tooth, at 96 months and counting, most (correctly) assert that business cycles do not die of old age. For the record, this is already the third longest upcycle since 1850. But it is also the weakest since World War II. The upcycle of the 1990s reached 120 months, but averaged 3.6% annual real GDP growth over that decade. The recovery since the Global Financial Crisis has averaged a bit under 2.1% annually. Given slower labor force growth (even absent a lower participation rate) and decelerating productivity improvements, the baseline growth in the years ahead appears to be in the 1.7% - 1.9% range. Expectations of a return to the growth of the 1990s simply cannot be justified in the numbers.

Some comfort is being taken by the absence of typical signs of economic overheating that often precede recessions. Inflation remains quiescent, with low energy prices driving prices at the gas pump down to near $2.00 per gallon during the peak summer travel season. The Federal Reserve has been gradually raising its benchmark rates, but is being careful to avoid squeezing economic growth in the process. The “Trump Bump” in stock prices has shown staying power on Wall Street, but as the year advances it becomes clearer that the agenda of tax reform, infrastructure spending, Dodd-Frank rollback, and entitlement reduction will not be accomplished in 2017. Hence, there is probably greater fragility in the economy than the consensus acknowledges and risk is present from either domestic disappointments or international disruption.

Jobs.  There seems to be a healthy fluidity in the labor markets, with the Bureau of Labor Statistics JOLTS (Job Openings and Labor Turnover Survey) showing job hires (5.5 million) well matched to job openings (5.7 million), and the number of voluntary separations (“quits”) at 3.2 million running roughly twice as high as layoffs and discharges (1.7 million). The unemployment rate was 4.4% as of June, its fourth consecutive month at 4.5% or less. Overall job growth averaged 180,000 per month during the first half of the year, and the Blue Chip Economists forecast slippage to a 166,000 monthly average for the balance of 2017.

Office sector demand has been bolstered with business and professional service employment rising by 625,000 year-over-year while financial service gained 169,000 jobs. Transportation and warehousing employment is up by 97,000, largely due to e-commerce (although this did limit retail job growth to just 20,000). Manufacturing eked out a 49,000 job gain, but construction activity posted a substantial job increase of 206,000 over the twelve months ending June 2017.

Policy. As of this writing, six months of efforts on healthcare reform (“repeal and replace”) have gone nowhere, and the legislative and executive focus on this pivotal issue created a logjam affecting all other elements of the domestic policy agenda. Most of the key tax cut items contemplated in the brief outline released by the White House in April were held together by the linchpin of purported savings in the failed Healthcare package considered by the House and the Senate. Without those savings, the tax plan either significantly increases the Federal operating deficit or requires draconian cuts to discretionary domestic spending. Either choice faces difficulty on Capitol Hill. The next immediate policy hurdle is the requirement to pass a budget and approve a debt ceiling increase in September, or else risk a government shutdown. “Who knew it would be so complicated?” In all probability, Washington will muddle through, as there is little upside to a pitched battle on policy at this point. Still, the high hopes many had for substantive change are facing a disappointing reality check and 2017 appears to be less the beginning of an era of disruptive change and more a story of “the same old same old” to those outside the Beltway.

Outlook. There is a very narrow range in forecasts for key variables in the economy: GDP growth; unemployment; personal consumption expenditures; trade balance; housing starts; vehicle sales; all are basically projected to continue recent trend lines. The difficulty is that while expectations are linear, risks are non-linear. Asset pricing in real estate as well as in the stock market is high, and investment volume is being driven more by the pool of capital than by earnings fundamentals. While some are extolling a “Goldilocks” condition in the economy, potential surprises are asymmetrical at this point – more likely on the downside than the upside – with risk managers now speaking more frequently about a possible “Black Swan” as the trigger for cyclical change. 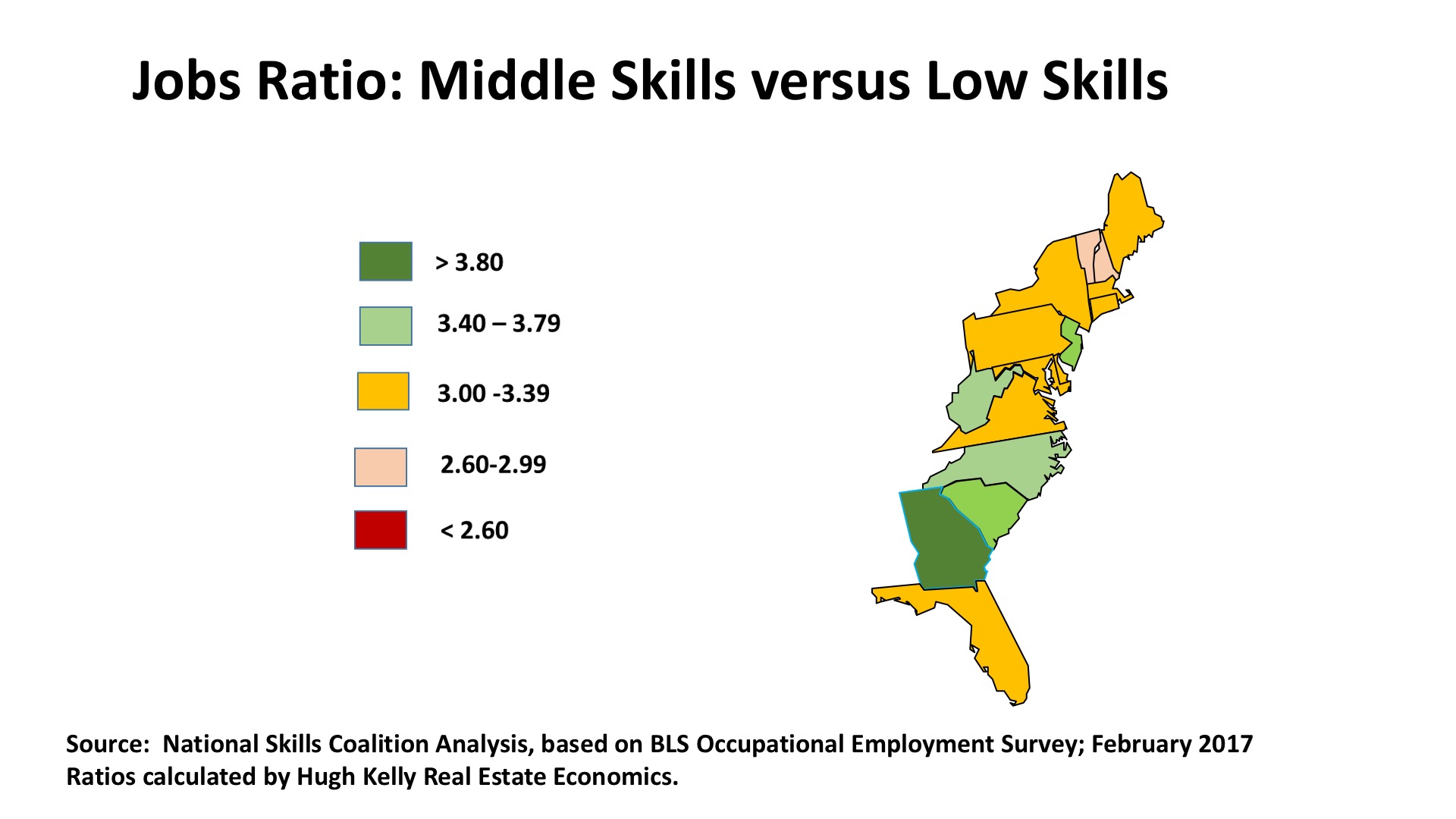 States along the Atlantic Seaboard have turned in a solid economic performance in early 2017. Florida (228,000), New York (149,100), and Georgia (103,100) led the region in net job additions year-over-year (through May, the most recently available data). At the same time, Maine posted one of the nation’s lowest unemployment rates at 3.2%, down 70 basis points from a year ago. Several other states (New Jersey, Rhode Island, and South Carolina) registered jobless rates several ticks below the national average.

The Southeast has been particularly strong, with growth in personal income in the national top tier for Florida, Georgia, and Virginia. New York, New Hampshire, Maryland, D.C., and both North and South Carolina also gained personal income in early 2017 at rates exceeding the U.S. average. The most recent Federal Reserve Beige Book (July 12, 2017) reports moderate expansion picking up in both the Northeast and Southeast, with the Mid-Atlantic somewhat softer. Slow growth, however, is more due to constraints such as tight labor markets, low inventories, and buyer resistance to high real estate prices.

Looking forward, opportunities for economic growth may depend upon what sector economists identify as “middle skill jobs.” Middle skill jobs require a high school education but do not demand a college degree. These jobs are prevalent in construction, building systems, transportation, and even in technician jobs in healthcare. Such jobs represent about 54% of U.S. occupations (high skill jobs are about 30%, and low skill jobs are 16% of the national total). Economic mobility in the future may come largely from workers’ ability to migrate from lower skilled job, which pay less and are more vulnerable to automation or outsourcing, to middle-skilled work. The accompanying map shows most Eastern Seaboard states have occupational profiles where middle skill jobs outnumber low skilled jobs by more than three-to-one, with Georgia, the Carolinas, and New Jersey especially strong. If, as many believe, it is particularly important that entry level jobs be the first step on an upward ladder of work, the East is in a good position to encourage such growth, even in a structurally tight labor market. 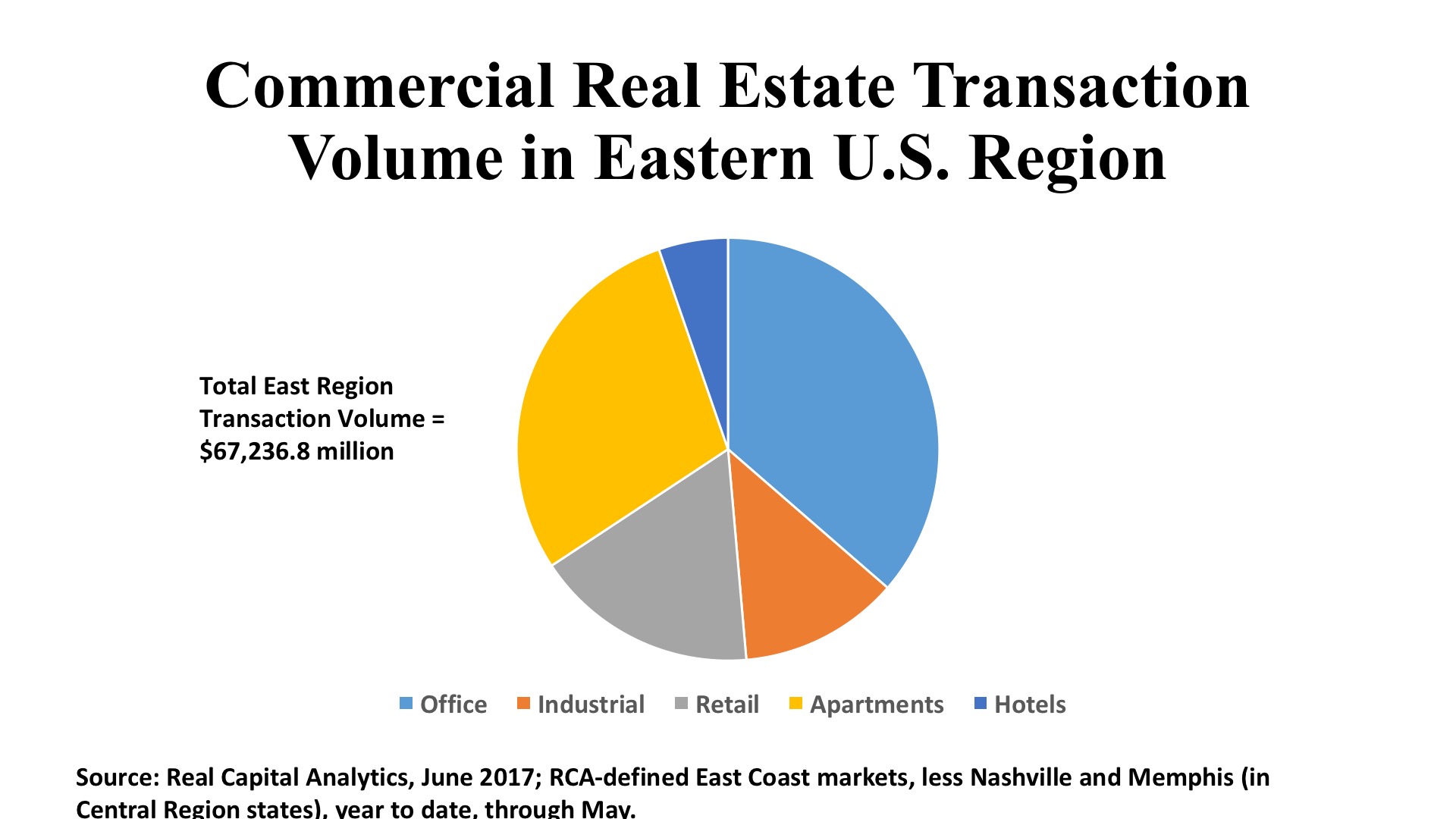 Now that we are solidly six years into a favorable real estate cycle, the velocity of investment transactions is easing.  Nationally, office deal volume is off 5% from a year ago while retail is down 20%. Industrials, however, are holding their own. There seems to be an abundance of capital seeking a home in commercial property, but high prices are constraining buyer interest and sellers are asking what their re-investment strategy might be if they chose to take profits at the present moment. As rents have returned to pre-crash highs and vacancy has tightened, investors are seeking higher cash returns now and relying on speculative income and appreciation improvements less. Nevertheless, pricing has remained strong even if deal flow has ebbed. The evidence suggests great discipline in the market. The question is: can it last?

Office. Transaction volume totaled $24.5 billion for East region states, year to date through May 2017. This was the greatest volume of any property type in any region and represented 48% of all U.S. office investment in early 2017. Manhattan, as usual, led the way with nearly $6 billion generated by just 38 deals. Boston was second, with 54 transactions aggregating $4.9 billion in acquisitions. Northern Virginia was the most active of the suburban office markets, with $1.6 billion in 18 deals, averaging a strong $361 per square foot. Charlotte’s suburbs attracted $1.2 billion, as 57 transactions averaged pricing at $218 per square foot. Northern New Jersey and suburban Philadelphia also posted considerable capital flows to office, with $911 million and $507 million respectively.

Industrial. The East also led all regions in industrial real estate deal flow, with $8.2 billion representing 37% of U.S. investment in this property type. Atlanta is the East’s hottest industrial market, with $921 million in deal flow generated by 95 individual transactions, mostly in warehousing. Northern New Jersey ranks second, with 64 acquisitions summing to $783 in price. Miami/Dade is strengthened by its import/export activity, attracting $422 million in industrial property investment in early 2017. Westchester County, north of New York City, has a vibrant market for flex space, with $728 million dedicated to such properties in early 2017. Raleigh/Durham also shows solid interest in the flex/R&D sector, with $303 million in purchases of such space.

Retail. This region also punched above its weight in the struggling retail sector, with $11.5 billion in store-based transactions accounting for 44% of all U.S. retail property sales price. South Florida is particularly active, with Broward County (Ft. Lauderdale) garnering $883 million in 40 shopping center deals. Miami/Dade follows closely with $781 million in transaction volume in 49 property sales. Atlanta comes next, $694 million committed in 67 purchases. Manhattan, despite the flood of “For Lease” signs on its stores, has the greatest volume of “high-street retail” investment, $903 million, flowing from 56 transactions with a staggering $1,976 average price per square foot. Boston and New York’s outer boroughs also see intense investor interest in urban shops, with prices per square foot of $697 and $674, respectively.